The Cottage on Crestline Gets a Makeover... 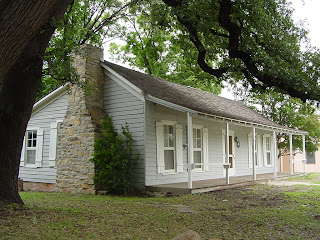 The historic Van Zandt Cottage sits, unassuming, in a grove of trees on Crestline Road at the edge of Trinity Park. I like to think that the Cottage ponders its past as it gazes at its modern surroundings. It recalls the days in the 1860s that it was constructed of mortised timber framing with a raised wood framed floor. The days that the land on which it was constructed spread out roughly to what is now Montgomery Street to the west, 7th Street to the north, the river to the east, and I-30 to the south.

The land was owned by many people, but the A.G. Scoggin family bought it in 1866. The Cottage was part of the land purchase started by Major K.M. Van Zandt in 1869. The Van Zandt family lived in the Cottage from around 1872 until 1878 when they moved to a larger residence on the corner of Penn Street and Johnson Avenue. The Van Zandt family retained ownership of the home until 1936.

The City of Fort Worth purchased the Cottage along with most of the current Cultural District from the K.M. Van Zandt Land Company on March 6, 1936 for $150,000 in connection with the construction of the Will Rogers Memorial Center and the Frontier Center for the Texas Centennial. The home was then restored by and placed under the guardianship of the Daughters of the Confederacy and the Daughters of the Republic of Texas (who withdrew their support shortly after the restoration to focus on the Alamo).

The Ethel N. Nichols – Van Zandt Cottage Foundation contracted with the City of Fort Worth from 1965 to 1996 to care for the home. On September 16, 1996, the maintenance, preservation and management of the Cottage reverted back to the Parks and Community Services Department under the care of the staff at Log Cabin Village since the Cottage is a 19th century structure.

On November 21, 2000, the Parks and Community Services Advisory Board endorsed the Master Plan for the Van Zandt Cottage, the oldest home in Fort Worth still on its original foundation and a Recorded Texas Historic Landmark. The adopted Master Plan included construction of an office with a separate climate/humidity-controlled storage area for artifacts and a handicapped accessible restroom; accessible flagstone walkways and parking area; removal of post-1936 restroom; and, total restoration of the 1850s era cottage.

Some of the early achievements of the Master Plan were: Phase I - the construction of an exterior restroom and storage facility on the grounds along with accessible walkway and parking area (May 2002); Phase II - the removal of the mid-1900s era restroom on the back of the Cottage (February 2003); Phase III - the removal of small artifacts (April 2003); Phase IV - exterior cleaned and painted; shutters and chimneys repaired; rear porch constructed (all in April 2004); and the completion of a restoration plan (March 2005).

With funding from the Van Zandt Cottage Trust Fund, established by donations from the dissolved Ethel N. Nichols - Van Zandt Cottage Foundation and continuing individual contributions, a Restoration Plan was commissioned with Arthur Weinman Architects in 2005. The results of this plan were a comprehensive internal and external examination of the condition and history of the 19th century home.

The Restoration Plan was shared with the Board of Directors of the Van Zandt Cottage Friends, a non-profit 501(c)(3) established in November 2004, at their March 5, 2005, Board meeting. The plan for the Cottage was then approved by the Parks and Community Services Advisory Board on July 19, 2005.

Once the Friends formed, the City of Fort Worth and the Cottage had a partner in preservation and fundraising. A key element of the Restoration Plan was finally achieved – the stabilization of the historic foundation. This started Phase V of the master plan. In the summer of 2007, the entire house was raised, and a perimeter beam foundation placed underneath the historic log beam foundation. The Cottage was now stable enough to start tackling the rest of its restoration needs. 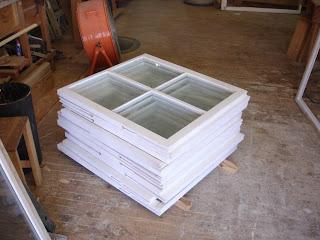 The restoration process is progressing now from the outside-in. By working first on the protective exterior shell, we can then move to the inside and work on more cosmetic issues such as trim, wallpaper and painting. The Friends of the Cottage have recently funded the restoration of the Cottage windows (May-June 2011). This process is almost complete and will be followed immediately by repair work on the front door and restoration of the shutters. The Van Zandt Cottage serves as an excellent example of the importance of partnerships, preservation, and stewardship of our historic resources.
Posted by Unknown at 2:23 PM

Tell Us What You Think